One thing most people do not know about me is that I love pottery. I had a 3D art minor in college and worked at a few different pottery galleries and studios as an instructor, gallery assistant, and overall do what I can helper so I could get time on a precious pottery wheel in exchange for working there a few hours a week. To me, pottery allows my creativity a place to come through and is, too, a place where I can both relax and reflect.

Some of my pottery

Now, anyone who has been to Granada has surely seen the pottery that’s for sale in numerous shops around the city. When I arrived in Spain, I new next to nothing about Spanish pottery or pottery in Granada for that matter. I just knew the general Dali, Miro, Picasso, and Velazquez art of Spain. Strolling through the streets of Granada I realized that there was a rich traditions of ceramics there, which made me more interested in the history behind it. I began to ask around and research everything there was to know about pottery in Spain, and specifically that of Granada. Turns out, that Granada just so happens to have the deepest history of pottery in all of Spain, which made me like the city even more!

The Fajalauza ceramics factory is actually just about the oldest family run business in Granada. It dates back to the Nasrid Dynasty and is still in business today. While the rulers of Spain have changed numerous times, this ceramics factory remains a functioning successful business.

The pottery made at the Fajalauza factory itself is very traditional and hasn’t changed too much through the ages. Their portfolio of work is primarily functional ceramics compromising of  bowls, plates, cups, vases, pitchers, etc. and tile work. As a potter myself, who focuses on functional pottery, it really excited me to see that this was an area of emphasis in the ceramic portfolio of a pottery factory in Granada.

Similar decorating themes are carried through the different pieces. Symmetrical designs, many of natural origin, such as birds, vines, flowers, and, of course, pomegranates wrap around the entire surface area of each piece. The base color used on the pottery is typically white with green and blue designs painted over the white. Each color used represents a different part of Granada’s natural surroundings. White is the snow on the Sierra Nevada mountains that can be seen from anywhere in the city, looking down on it. The green is the green from the natural, lush landscape surrounding the city. Lastly, the blue is both the blue skies and the blue sea, which is only about 30 minutes away. 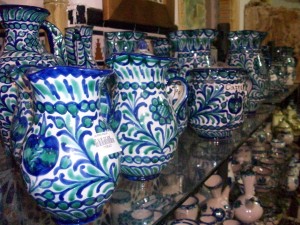 If you’re ever in or have been in Granada, you can see the pottery throughout the city in many shops, tapas bars, and restaurants. Many of the street signs on the buildings are tiles that are done in the three colors typical of Granada’s ceramics. Strolling through anywhere in the city, it’s also incredibly easy to spot the white, green, and blue.

6 responses to “Pottery in Granada”