Yes, that’s right! I got my school teaching placement!! I didn’t have to wait until mid-July as I was originally anticipating. In fact, it only took about a week an a half from getting my regional placement. I will be the North American Language & Cultural Assistant, or auxiliar de conversación, at C.E.I.P San Miguel in Almuñécar, Granada, Spain. It’s a primary school located in Almuñécar, which is right on the Costa Tropical in Andalusia looking out on the Mediterranean Sea.

Being located right on the Mediterranean, Almuñécar has roughly 26,000 residents, which swells to around 150,000 during the summer months because of vacationers from Spain and northern Europe. Just to the east is Salobreña (12,500) and Motril (59,000), and Nerja (22,000) is located just to the west. Málaga is a 60 minute drive west, while Granada is a 60 minute drive north. Almuñécar has a comfortable average winter temperature of 15 Celsius (59 Fahrenheit), which would be a welcome changed from Wisconsin’s long, cold winters.

There is a large castle, Castillo de San Miguel, that’s up high on a cliff over looking the city, beach, and sea, and a Roman aqueduct about 1 mile north of Almuñécar. A fun historical note is that Almuñécar used to be called Sexi when it was a Phoenician city (thank you for this fact Trevor Huxham). Aside from the Phoenicians, it also has been influenced by the Visigoths, Muslims, and Christians throughout history.

To be honest, I was expecting to be placed in a small pueblo with somewhere between 2,000 and 10,000 people, so needless to say, I was a little surprised when I saw that I got placed in a slightly larger city that I would feel comfortable living in. Most auxiliares are placed in a small pueblo located 15 minutes to an hour outside of a large city and live in the large city while commuting to work everyday either by bus or carpool with other teachers from their school. Being placed in a such a stellar location directly on the Mediterranean Sea and an hour from both the bustling cities of Granada, mi cariño, and Málaga puts me in a tricky, but welcome, situation when it comes to deciding where to live…

Living in Granada again would be more than I could ever ask for, as ever since I left back in 2010, I have not gone a single day without thinking about returning and walking through the city that captured my heart. On the other hand, Almuñécar poses the incredible opportunity of living in a smaller city on the Mediterranean coast. After an entire day – yes, just one day, 24 hours – of contemplating and researching this I’ve come up with a pros and cons list:

Pros (in no specific order)

Cons (in no specific order)

*Almuñécar may give me a better chance to improve my Spanish as there would be less Americans around, but there is a strong northern European influence in the area (British, German, Dutch, French,…) because of tourism, which could lead to me using less Spanish and getting a less “Spanish” experience. I suppose it’s all relative in how hard you try to speak the language and become integrated though.

Oh yes, there is Málaga too, which I am not against, but would be my third choice as of now. It could be because I only visited on a day trip, and it was gloomy and rainy. 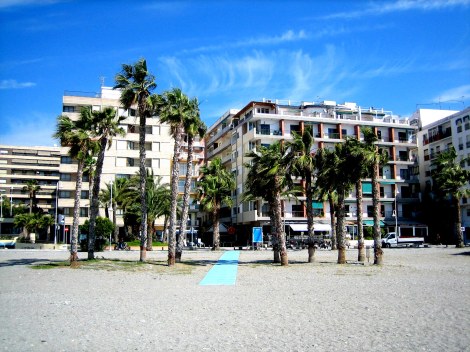 What I’ve decided as of now, on a whole 24 hours of thinking mind you, is to simply try and contact my school to see what the teachers there do. Do they live in Granada, Malaga, Almuñécar, or elsewhere? Is it possible to carpool with them or would I need to rely on the bus? Essentially the answer to these questions would be the biggest determining factor in my decision. While I’m getting antsy and excited about this whole decision because I finally know the area I’ll be in, I also know it’s still about 4 months off and I have plenty of time to decide on my exact whereabouts.

Have you been to Almuñécar? What did you think of it? Do you have a recommendation on where I should live?

28 responses to “Almuñécar, Spain: Where I’ll Be Teaching”