La Rioja. It’s the region of Spain I will be teaching English in come September. I just received word of my region placement today from the Spanish government, and I’ll be told of my exact city and school within the next couple weeks.

Never before have I been to this region. In fact, Burgos, Bilbao, and Pamplona are the cities I’ve been to that are the closest to the small region in north-centeral Spain. However, everything I have heard about La Rioja from friends and future fellow expats is that it’s a great place.

Although, maybe this is like when I played my baritone during a church service growing up. Everyone said I did so well and was great. In all honesty, were they going to approach me and say I was bad? Didn’t think so. That aside, I truly do believe everyone who has told me that La Rioja and its capitol, Logroño, are beautiful places. So, thank you for that! I’m digging up as much information as I can on the region through some online research and talking to people who have been there, and you can bet your bottom dollar – euro – that as soon as I got my placement email on my phone, I minimized whatever I was working on at work and started researching La Rioja.

As I believe many readers know just about as much about the region as I did before my frantic researching, I thought I’d share a some background information about the region with you all, so you’ll have an idea of where I’ll be since you’ll most likely be reading about it in about 5 months when I’m in Spain!

Wow! 5 months. Sorry that just hit me. I can’t wait though! But back to La Rioja…

Chances are if you know only one thing about La Rioja, it’s something wine related as Rioja wine gets its name from the region. we’ll get back to that later though. Geographically, La Rioja sits in north-central Spain, bordered by Castilla y León, Navarra, País Vasco, and a small piece of Aragón. It is its own autonomous community and province, opposed to Andalucía which as multiple provinces within the autonomous community. It’s the smallest and least populous of all the autonomous communities on Iberian peninsula, which doesn’t include Cueta, Melilla, and the Belearic Islands. There are roughly 325,000 people living in La Rioja, a little bit more than the entire country of Iceland. The largest city is Logroño (about 150,000 inhabitants) followed by, Calahorra, Arnedo, Haro, Alfaro, and Nájera. 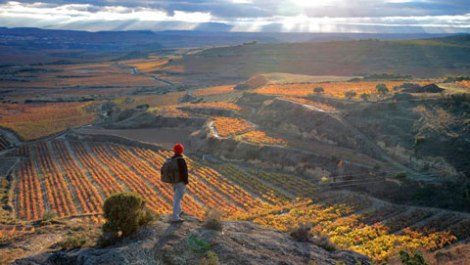 The region is sometimes called the “Zone of Seven Valleys” because there are seven valleys across La Rioja. Rivers flow through the valleys which are separated by mountains, the highest being Monte San Lorenzo at 2,271 meters or 7,450 feet. There are 3 main separations in the region: Rioja Alta, Rioja Media, and Rioja Baja. Average annual temperatures range from 53°F to 88°F (11.8°C to 31.8°C).

The single largest annual festival in La Rioja is the Batalla de Vino in Haro. It’s held on July 29th. Everyone dresses in white with red scarves and parades through the streets to mass. After mass, a celebration ensues where red wine is thrown all over everyone, and the white shirts turn to red/purple/pink stained ones. To me, this seems like a blast!

Piggybacking off that, back to what you probably already knew about La Rioja – Rioja wine. Rioja wine comes from the grapes harvested in La Rioja and some of the neighboring communities. There are few different varieties of Rioja, which I feel like I can, and should, delve deeper in to once I’m actually in the region and can truly report on everything there is to know about it. Sorry to leaving you hanging! Also, La Rioja and Logroño in particular is supposed to have a rich food scene, which I’ll inevitably be checking out and reporting back on. In the meantime, check out Cyra’s blog Gastronomic Nomad to read more about the food scene in Logroño.

Once I receive my city and school placement in the coming weeks, I’ll be writing a post detailing more specifics on where I will be living within La Rioja.

Have you ever been to La Rioja? What are your thoughts on it?