Crowds of people slowly rushing from the main streets disappearing down narrow alleys and streets. A blazing siren calling out from multiple minarets to which the crowds were all headed towards. People gathering and kneeling outside of and around the mosques praying.

These were all some of my first scenes of Tangier that I can still replay in my mind even years later. The sights, the sounds, the smells, and the tastes were some of the most exotic and exquisite I had experienced up to that point in my life and quite frankly still are. Everything was new, foreign, and different, including me.

Upon my arrival, I happened to catch the Adhan, or Islamic call to prayer. Morocco, being a primarily Muslim country, has that mosques sound a siren from their tall minarets five times a day to remind Muslims to pray. Many scurry to their place of worship, kneel with their arms out, and pray. A curiosity of mine a first, this came to be just another part of daily life. It was incredible to experience this cultural happening because it was all new to me, even if it meant that what I saw while arriving was hardly anything special. I even had a local showing me around the kasbah in Tangier tell me to stay put while he sprinted off to prayer, returning about 10 minutes later. In hindsight, he probably told me to stay there because he wanted payment for his tour, but it was his devout religious beliefs that really had me impressed.

Vegetables, meat, and spices – tagine. Moroccan food was a taste I had never had the joy of experiencing. I had yet to have it in Granada and hadn’t had it back in Milwaukee. The flavor overwhelmed me as I took my time enjoying the savory dish that is a staple of the Moroccan culture. This could have been because it was delicious or because it was simply nice to sit down and relax after exploring the winding streets of the kasbah and having all my senses activated from all the newness that is Morocco. I’m going to go with a mix of those two but mostly the former. My meals in Morocco were and still are some of the best I’ve experienced even if the shock of whole birds and severed animal heads in the markets was more of a surprise to me than I expected.

In Spain, my home for four months prior to this trip, I had picked up the language and could understand it very well. All of my travels up to this point, during my study abroad experience or not, were all in countries where I could pick up the language, or at least read and comprehend a few words to get by. Arabic, not so much. I couldn’t read the signs nor understand the spoken language. English, French, and Spanish were spoken enough to where I could get by. However, next time I visit, I’ll hopefully know more arabic phrases.

While being an African country, Tangier was a confluence of sorts of Arabic, African, and Western European culture. There seemed to be a number of expats living throughout Tangier that had accumulated over the years, which lead to a wider understand and speaking of different languages. Tourism undoubtedly also played a role in this too. This confluence and mixing of cultures added an element to the city that I did not foresee. Slightly English with a large dose of Arabic and a dash of French and African. The most interesting part about this was that there was no distinction or segregation between any of the groups. They all sort of mixed together like nothing I’d ever really seen before. It truly struck me as a melting pot of cultures that had grown together over hundreds of years.

Although Tangier felt like a true blend of many cultures, I still felt as though I stuck out. This was the first time in my lifetime I’ve experienced this feeling. A blonde haired, blue-eyed American didn’t really fit in the western Saharan country, even though the city seemed to welcome expats. Now, I should say I was not chastised or treated poorly at all by any means, but I did feel like I received more looks as an outsider than I had in my past travels. The looks faded and became normal, but while being different, I felt as though I was accepted. Not once did I feel treated like someone who did not belong. People were welcoming and generally friendly, and at the very least, indifferent to me. 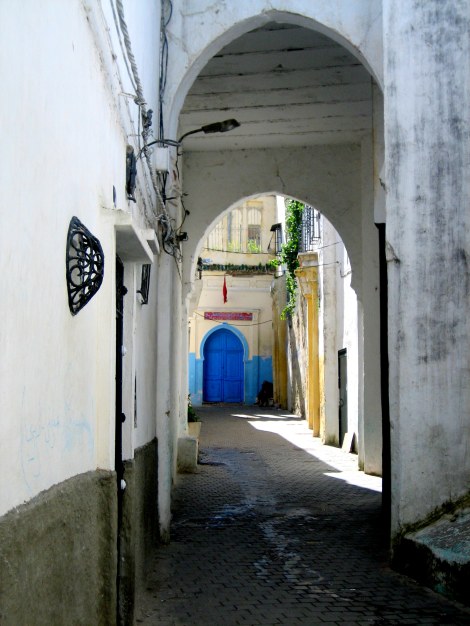 Tangier was a different city – different from anything I’ve experienced and different from what I expected. It was a junction of cultures that had made this co-mingling work successfully for years. The language, delicious food, and religion were all firsts for me, and I cannot imagine a better place to have experienced it. A certain uniqueness is captured in Tangier that one would be hard pressed to experience elsewhere. As the world continues to change and time passes, the mixture of sights, sounds, tastes, and smells in Tangier that seems to have been around for hundreds of years is something to be experienced – to be lived.

2 responses to “The Melting Pot of Tangier”